Herne Bay Junior Badminton Club celebrated its 50th anniversary on Saturday 7 December. To celebrate, we held a UV (Ultra-violet) session. We turned the lights off and covered the courts, shuttles, racquets, nets, and of course the players in UV tape, lights, and body paint. UV cannons then lit everything up and the celebration and the games began. 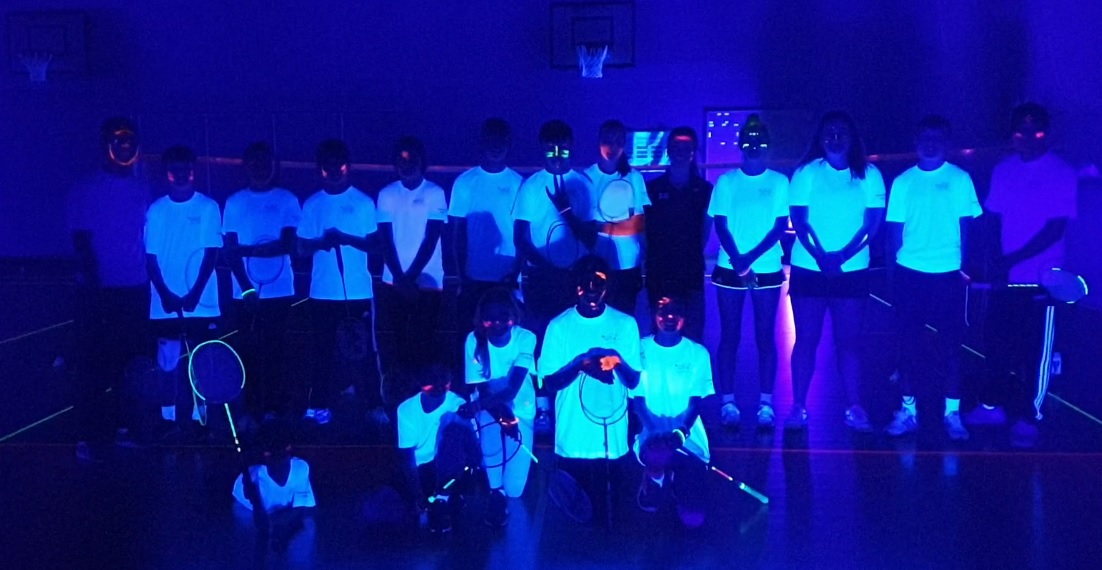 The event was attended by VIP Guests including: Sue Whetnall, Geoff Rofe, and Holly Williams.

Sue Whetnall has won many awards but particularly the 1969 All England. Sue presented players with commemorative tee shirts sponsored by KBSA (Kent Badminton Supporters Association) and goodies from Badminton England.

Holly Williams plays for Kent and England and won a Silver medal by reaching the final of the U17 European Championships this year, a phenomenal result at 16, demonstrating that hard work and training alongside inspirational coaching works. Holly demonstrated her skills and ability against our players. Melissa and Jude took her on first, then Luke, Samuel, Flynn, Navya and Lizzie. Holly will represent her school in Greece in April 2020 for England in the World School Games.

Herne Bay Junior Badminton Club began in 1969 when volunteers coached players aged 8-18. The aim was to help new young players enjoy the sport, to help badminton grow and to pass their skills on to players of the future by teaching the shots, honing technique and tactical skills and helping them reach the best level of play that they could. Coaches supported progress and kept the sessions fun. Players progressed to National, County and league levels. These goals remain the same.

In the club’s 50 consecutive years we have had only 6 regular coaches, all still volunteers. Mike started the club with Jock, then Robin and then Paul who, along with Mike, coached for over 20 years. Linda and Gary joined in 2002 and are now coaching alongside Simon and Cassy.

Playing at Bay Arena, our players are aged from 7-18. We have an even split of girls and boys and some exciting young players preparing for the next 50 years……